Welcome to the Kiteretsu Wiki. Here you we see the thing going on in the show, and the characters.

Kiteretsu, year old boy who invents or rebuilds things given in the Daihyakka he and his invention/robot Korosuke go on adventures on every episode and face challenges. 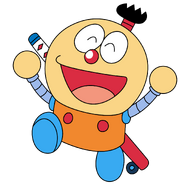 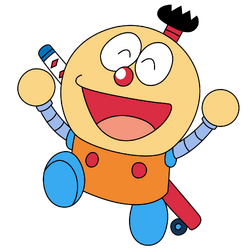 Korosuke (コロ助) (Koro Assistance) is one of the main protagonists of the Kiteretsu Daihyakka series. He is a robot created by Kiteretsu and can speak, behave and has emotions like normal human beings. He carries a small sword with him and usually ends his sentence with ~nari, in the Japanese version. He is shown to be a naive and extremely stupid character. He helps Kiteretsu in his inventions even though most of his inventions fail because of him. He has a striking resemblance to Doraemon but his attributes are like those of Nobita.

Community content is available under CC-BY-SA unless otherwise noted.